Charley Descoteaux is stopping by this week to tell us about the birds that appear in her novel.

When I first started writing my novel about Phil and Lee I called it Strange Birds. I used that working title so long, no other title seemed to fit. Which was a problem when I wanted to submit it. Strange Birds doesn’t exactly scream Romance Novel, does it?

I love the title I chose, but feel the need to let everyone know actual birds are involved. I don’t want anyone thinking “strange birds” is a euphemism or any kind of joke, so here are the actual birds, in order of appearance. 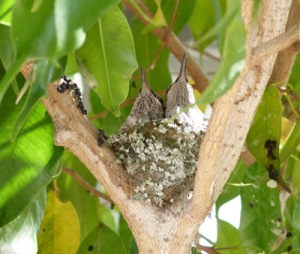 I’ve had hummingbird gardens in the past, full of fuchsias and butterfly bushes. Now that I’m on the fourth floor in a north-facing apartment, I have to rely on photographs. Lucky for me, I have an in with some amazing photographers via the Absolute Write Forums. 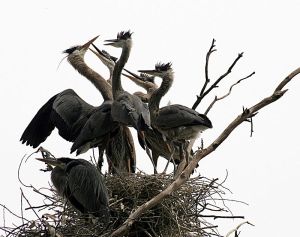 These are older and larger than the babies in SB, but they’re so cute! Blue Heron nests are usually 2-3 feet in diameter before the eggs hatch, but are a work in progress as the chicks grow. A nest can grow to over 5 feet in diameter and 3 feet deep to accommodate the long-legged babies. Sometimes it can grow a foot or two overnight, which I learned one spring a few years ago, as I watched a clutch that lived in a nearby park.

I love these birds—they always look angry, but seem to play well with others. When I first moved to Oregon I would check off every new bird species I found. The grosbeaks shared the food with many other types of birds with hardly a scuffle, and, being 6-9 inches long with a wingspan of 12-14 inches, they look cool in large groups.

This juvenile osprey looks about ready to leave the nest permanently. I’ve been lucky enough to watch parents teaching their young to fish at local rivers and lakes. They’re amazing hunters!

Almost everyone has probably seen a hawk soaring at one time or another. They make flying look effortless! 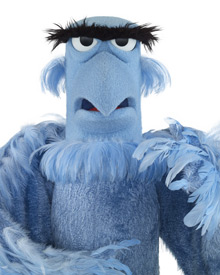 Sam isn’t in the avian cast directly but he’s mentioned as inspiration for a work of art, so I had to include him. I loved him on The Muppet Show, always trying to maintain order in the midst of happy chaos. He reminded me of the bald eagle I saw near my little house in the middle of nowhere. That eagle suffered silently as a small group of crows tried to chase him out of the tree. Somehow, he managed to look dignified the whole time. But I still brought my cats inside—he must’ve weighed fifty pounds and could’ve made off with both of them at once without batting an eye.

Have you ever seen a strange or rare bird? I’d love to hear your stories of watching hummingbirds build nests, an osprey hunt or a bald eagle sitting in silence as a family of crows try to chase him out of their tree!

All he ever wanted was to be a normal guy….

Phil Brask spends his days in the basement of his mentor’s Victorian home, converting legal documents into electronic format. When the pipe feeding the water heater bursts, Lee Redding arrives in the plumber’s truck and draws Phil away from the narrow focus of his computer and camera lens. Lee gives Phil hope for a life beyond the walls he’s constructed using the nesting habits of migratory birds and dense legal files, a guided tour through a world filled with romance and music…maybe even family. But there’s a reason Phil retreated behind those walls, why he panics at a simple touch.

Lee has a good life—working with his uncle and on his mother’s farm, playing bass in a horrible metal band, and hooking up when he pleases—but he’s always suspected something was missing. When he meets the hot photographer with the icy-blue eyes, he knows exactly what that something is. Phil isn’t like other guys, but neither is Lee beneath his carefree exterior. Maybe Lee’s the perfect guy to show Phil that everything doesn’t have to be done the hard way and “home” isn’t a four-letter word.

Lee popped the tops on two cans, one in each hand, as he walked across the clearing. He’d spent a few Willston Jubilee weekends working in the beer gardens, and opening twice the number of beers he could drink at once wasn’t the only useless skill he’d practiced. Phil’s eye roll didn’t take anything from the fact that his face wasn’t pointed toward the ground.

“Ch-check it out.” Phil took a long pull from the can as he stepped aside to let Lee look through the viewfinder.

Lee was speechless. The view was like nothing he’d ever seen in real life: a huge bowl-like nest that had to have been made from branches the size of his wrist sat near the top of a tall old maple. Two full-grown blue herons stood outside the nest, and as Lee watched, four or five beaks appeared and started a cacophony of bird sounds.

It was cool, but not cooler than what happened next. Phil moved so close he was almost pressed against Lee’s side, and then he bumped him out of the way with a strategically placed shoulder. Lee took a few steps sideways to keep his feet and when he turned, Phil was snapping photos like a photographer on America’s Next Top Model. And smiling. Not a split your face kind of smile—somehow Phil’s plain joy packed even more of a wallop. Phil was captivated by what he was doing—snapping a series of pictures, fiddling with the settings on his camera, and then snapping few more.

If the guy puts that much effort into sex, I might not live through it.

The Nesting Habits of Strange Birds will be released on August 11. Until then, $1 for every pre-order will go to The Trevor Project. They do great work with LGBTQ youth in crisis, and need our support to continue.

Charley Descoteaux has always heard voices. She was relieved to learn they were fictional characters, and started writing when they insisted daydreaming just wasn’t good enough.  In exchange, they let her sleep once in a while. Home is Portland, Oregon, where the weather is like your favorite hard-case writing buddy who won’t let you get away with taking too many days off, and in some places you can be as weird as you are without fear.  As an out and proud bisexual and life-long weird-o, she thinks that last part is pretty cool.

Rattle my cages, I’d love to hear from you!